Not to be confused with SuperLuigiLogan.

The first SML2 channel originally belonged to JJ and was named "Spooka", but since he didn't use it anymore, Logan Thirtyacre acquired it. He posted a photo on Instagram announcing the new channel on July 16, 2018. However, as the channel never got monetized by YouTube, he later ended up giving the channel back to JJ.

The second SML2 channel was created by Logan on 2nd September 2019 when he announced it on Instagram. However, the channel was later terminated by Youtube.

The videos would be censored and "family friendly". However, some profanity was still uncensored, suggesting that only extremely offensive words were censored.

Originally, the channel used to be JJ's channel, Spooka. It was created on September 12, 2013. JJ mainly made gaming videos on the channel. It's possible JJ didn't use the channel anymore, and therefore, gave it to Logan.

On July 18, 2018, Logan acquired Spooka and renamed it SuperMarioLogan 2. Logan would reupload SML videos, editing non-advertiser friendly content out of the video and making the original videos private on the main channel. According to the channel description, it stated that, "the original SuperMarioLogan account got completely demonetized," and that Logan said that he would "be re-uploading all of the SML videos on this channel." SML 2 would also be the channel were the new SML movies and shorts would be uploaded on in case SuperLuigiLogan got demonetized. However, time passed and since the videos were getting demonetized although censored, this wasn't working.

Despite Logan stating that SML 2 was hacked, On August 29, the truth (revealed by JJ himself) was that Logan deleted the videos himself and gave the channel back to JJ after views and subscriptions were lowering. Logan later confirmed that he did give the channel back in a Chilly vlog. After releasing the now deleted video, JJ then immediately changed the channel name to Lil wock and later JJ. When SuperLuigiLogan later got demonetized, Logan did not reacquire JJ's channel and opted to move to SuperBowserLogan. 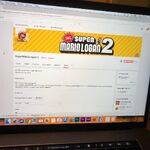 After the new SuperMarioLogan2 got terminated by YouTube, Logan decided to recover his older channels SuperYoshiLogan, SuperWarioLogan,SuperWaluigiLogan, and SuperDaisyLogan. When Logan and the Jimenez family broke off ties, Chilly, Tito, and JJ removed any mentions of SuperMarioLogan2 from their videos. JJ even deleted the video about the truth on the original SML2. Logan also removed any videos and posts that mentioned SuperMarioLogan 2, thus removing all remaining traces of SML2.

Retrieved from "https://sml.fandom.com/wiki/SuperMarioLogan_2?oldid=499633"
Community content is available under CC-BY-SA unless otherwise noted.