Shrek Safe Cheesecake lll is a recurring/minor character (formerly main) in SuperMarioLogan. He is a fan version of the titular protagonist of the Shrek franchise.

He is an obese ogre who has an obsession with and addiction to cheesecake. He weighs about 750 pounds (mentioned in Joseph Moves In!).

In the early episodes, he was a main character. However in later episodes, he is now a minor character who doesn't appear in videos often because his crapping has violated YouTube’s guidelines since 2018. However, as of October 2020, he seems to slowly be regaining his status as a recurring character, though he seems to be on and off like Black Yoshi. Though unlike Black Yoshi, his appearances are only smaller roles rather than getting episodes focused on him.

Shrek was born on October 17, 1960, and was raised in Inverness, Florida,  He moved to Waterford, Ireland, after he finished attending Worcestershire Academy in the early 1980s.

In 2008, he left Waterford, Ireland, and moved to Pensacola, Florida because he had been selected to go on Main Character Judging and since he won the award, he now currently lives with Mario

He, Black Yoshi, and Woody mooch off of Mario by living with him without any payback.

Shrek was originally from the DreamWorks film franchise of the same name and he won the Main Character Judging and picked Tour Guide for Today along with Mario. His longest appearance is probably shrek life .

He also appeared in Season 2 of Mario and Luigi's Stupid and Dumb Adventures. He makes a few cameos in the background of Logan Thirtyacre early videos such as TONY'S LIFE STORY.

He also makes a brief cameo appearance in Logan's later videos such as Bowser Junior's Cellphone, Bowser Junior's Game Night 2, Bowser Goes to the Movies!, Jeffy's Mistake!, and The Bet!.

He is also the main antagonist of Toad's Mistake 3, Shrek's Crappy Wish, Shrek's Bath Problem!, and Shrek the Babysitter!.

In the episode "The Ring", Shrek drank too much slippin, making him poop, and ran to the bathroom and poops all over it.

He has eaten so much cheesecake that his veins are filled with cheese, and he is obsessed to the point that he murdered Toad for eating his cheesecake. He also has diabetes and that his digestive system is destroyed, as revealed in Shrek's Diet!.

Shrek also is obsessed with taking "craps" in the bathroom. He at one point even got his own sewer just to contain his crap. His obsessions lead him to wasting his entire life eating cheesecake, taking craps, and just generally being gross.

Shrek is known to have a very short temper and this usually occurs when he doesn't get food or when someone disturbs him.

This is noticeable in The Bird when Skittles eats Shrek's McDonald's and disturbs him when he is making love with/eating his cheesecake in his room.

Shrek is also shown to sometimes extremely cruel to just about everyone. He has shoved a corn-dog up Mario's butt, forced Mario to drink his diarrhea simply because Mario wouldn't give him toilet paper, brutally murdered Toad multiple times, threw Toad out of the house, made Toad eat his crap on multiple occasions, gave Toad a swirlie because he ate his cheesecake, made an extremely hurtful and mean rap against Toad with Black Yoshi, and much more.

He also calls everybody that he likes or generally doesn't dislike "donkey". Revealed in The Couch!, Shrek calls his enemies "Lord Farquaad".

In the old era, Mario and Shrek used to get along better, but as time goes on, Mario and Shrek fight more often and their relationship has declined into a neutral status. Mario always gets annoyed at Shrek due to his constant begging for him to buy him cheesecake and walking all over him. Mario also dislikes Shrek because he calls "Donkey" and freeloads off him.

Shrek and Black Yoshi seem to get along well and could be friends. They often team up with each other (mostly to kill someone).

In The Bird, Skittles, a rare African bird that Woody adopted, ate Shrek's cheesecake and McDonald's and messed with Black Yoshi's Call of Duty (which he does like). This resulted in them teaming up to kill Skittles. Shrek stuffed him in a trash bag, tossed the bag to the side of the house, and had Black Yoshi shoot him. However, a news report then states that the bird was missing from the zoo and that a $20,000,000 reward will be given to anyone who can bring it back alive.

In Toad is Cool, he and Black Yoshi teamed up again, to oppose Toad and Ray Cheesy through a rap battle.

In the Early episodes, Chef Pee Pee respects and gets along better with Shrek for being more tolerable then Bowser and Bowser Junior. But as time goes on in the later seasons, Chef Pee Pee finds Shrek gross and disgusting and dislikes him.

Shrek dislikes Jeffy, as seen in "Shrek The Babysitter!", but in "Jeffy Loses His Teeth!, they seem to actually get well with each other. 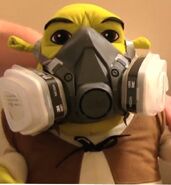 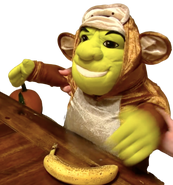 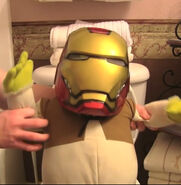 Add a photo to this gallery

Retrieved from "https://sml.fandom.com/wiki/Shrek?oldid=490035"
Community content is available under CC-BY-SA unless otherwise noted.