for information about the Super Mario version of this character go here.

Rosalina Mario is the female main character of the SuperMarioLogan franchise.

She made her debut in the American Idol reboot, but she wasn't relevantly introduced until the following video, Mario's New Girlfriend!.

She is a human that was born and raised in outer space by two green aliens, and it's possible but in confirmed that she still lives with them. She is the adoptive mother of Jeffy. As of October 27, 2017, Rosalina became the official wife of Mario.

After Bowser's Mistake! on the 25th of July 2018, Rosalina appeared seldomly due to her actress Elaina Keyes attending school outside of Florida and having personal problems with some of the SML crew, namely Chilly, leading to the belief that she has been retired from the series as a main character.. However, she returned in Doctor Jeffy after a long hiatus. Rosalina has appeared in most Jeffy videos since and seems to be a main character again though she seems to be appearing on and off in similar cases to Black Yoshi. As of Hurricane Jeffy!, she has seemed to become a full time character once again due to Elaina moving back to Florida.

Rosalina was born by two human parents who possibly were neglectful and left her as a baby. Rosalina was found as a baby by two green aliens, who adopted her, although they didn't tell her that they were not her real parents. Her real parents are unknown.

Rosalina first appeared in the American Idol reboot series, but she wasn't properly introduced until the video, Mario's New Girlfriend!, where she and Mario fell in love and started dating.

There have been times where Mario would argue, but these arguments mostly have been caused by Jeffy.

There were also times when Rosalina was theorized to have broken up with Mario, but they remain together to this day, and she was super excited to get proposed to.

Rosalina appears the same as she does in numerous Mario games, having a long cyan gown, platinum blonde hair with a side bang that covers one of her eyes and cyan eyes.

In her puppet form, Rosalina wears a cyan tank top and blue pants. The star brooch appears as a necklace worn on her neck. She also wore sandals in her first appearance as a puppet, though she seems to have ditched them in the rest of her appearances as a puppet like Crystal did with her sandals in her later appearances, and as a result is now barefoot. Instead of platinum blonde hair, her hair is completely blonde akin to Peach's.

In her first two appearances, she was a crybaby who sobbed over the stars because the sun took them away. She and Junior had two things in common: they were both big crybabies, and they both believed the sun was a planet. Rosalina missed her star, Luma. But then, Mario brought him back to her, causing her to love him.

For the rest of her appearances, she has been portrayed as a stereotypical ditzy dumb blonde, most likely because her initial personality was flat, one-note, and annoying. Despite this, she is incredibly sweet and caring. For example, in Mario's New Girlfriend!, just like Bowser Junior, she thinks the sun is a planet and not a star and in Doctor Jeffy!, she gets stuck at a stop sign for a year while thinking it's supposed to turn green.

Over time she developed to be more intelligent and less dumb and much more serious and not oblivious.

She is very kind to Mario and is very in love with him, unlike Peach, who treated him like dirt, often for very minor reasons that makes her seem like she's using him for her own ends. Rosalina also has deep motherly affections towards Jeffy, while Mario hates Jeffy and wants to get rid of him.

She can get defensive of Jeffy to the point that she ruined her own husband's reputation, claiming to the police that Mario likes to beat Jeffy up all the time, which is not factual.

However, in her recent appearances since the introduction of Jeffy, her relationship/marriage with Mario escalated into a female-on-male abusive relationship with Rosalina as the perpetrator.

Rosalina is shown to be unreasonably impatient towards others, especially Mario, to the point where she acts like a selfish brat, shown in Jeffy's New Toy! where she imitates Mario being shocked by her sudden appearance in his house.

In the same episode, she is revealed to have an evil and torturous side, as she terrifies Mario just for lying to her. This revealed that Rosalina can also be hypocritical, as she criticized Mario for lying, even though Rosalina lied to the police that Mario likes to beat Jeffy all the time.

Furthermore, Rosalina was with Mario the whole day, leaving there no time for Mario to call a prostitute. She also attempted to call the police on Mario in The Dead Body!, assuming that Mario purposely killed a hobo, without any evidence that he purposely did so, or letting him give an explanation.

Additionally, Rosalina is shown to be immature for her age, due to her initial cries over the sun blocking the stars, though this seems to subside. In addition, in Jeffy's Brain!, she thought it was perfectly acceptable to throw her plate of unwanted food at the wall, just because Jeffy, a twelve-year-old kid who also acts immature, does the same multiple times.

Rosalina is presumed to have some pedophiliac tendencies , as shown in Shrek's Coma!, Where she was shown to have found Shrek in the body of Atso, a second-grader, to be sexy.

She absolutely hates having a tone of money and wants Mario to do the same thing. She would only spend some time with Mario and her annoying son Jeffy, and tells Mario most of the time to control is anger.

Even though Rosalina can be sweet and ditzy, she still has a criminal record.

Rosalina truly loves Mario and has a strong bond with him. He's Rosalina's husband. She is mostly seen hanging out with him. She also takes care of Jeffy with Mario as a parental guardian. Nowadays, Rosalina rarely gets really irritated with him being mean to Jeffy, though. She also tends to cheat on Mario.

After Jeffy got taken away in Jeffy's Parents!, she gets mad at Mario for his heartlessness and breaks up with him on the spot. She later returns to him when he adopts Jeffy. In Black Yoshi's Mistake!, Mario proposes to Rosalina. Surprised and delighted, she says yes.

In Mario's New Hat!, the two's wedding day has finally arrived. Though she almost calls it off when Mario mysteriously disappears. Once Mario finally shows up as a Frog and explains what happened, Rosalina declares that she doesn't care what he looks like and she loves him for him. Goodman (after comically warning Mario that she'll take everything he owns because she didn't sign the prenup) makes them take their vows and they finally get married, with their kiss breaking the spell over Mario.

How, her mostly healthy relationship/marriage with Mario

Eventually in 2020, she eventually still gets frustrated with Mario when he becomes very greedy and selfish in recent videos. However, due to her own unintelligent nature, she tends to give very dumb advice on why Mario shouldn't be greedy, such as in Mario Sells Jeffy! when she thought that people only went to work "for fun" and not to pay for bills, food, and other necessities.

Rosalina is very nice to Jeffy and shows to love and really care about him. She does not seem to have a serious problem with Jeffy's lack of intelligence and is willing to spend time with him. Rosalina is best described as a "pushover parent", in that she blindly defends everything Jeffy does, even if he misbehaves, and labels any form of discipline on Mario's part to be child abuse. She is a terrible influence on Jeffy.

The only time Rosalina gets frustrated with Jeffy was in Jeffy Gets Potty Trained! when she forced him to eat his peas, but Jeffy demanded marshmallows instead. She also sometimes gets mad at him in recent videos. And in Jeffy's first apperance (Mario the Babysitter!) she did not like Jeffy and was even a little scared of him.

Rosalina's ex-boyfriend that Mario got jealous over. D-Money broke up with her since she was being dragged along with him too much. Her parents had preferred her dating him instead of Mario.

Rosalina first met Bowser Junior in Jeffy's Birthday!, when Jeffy was about to go on the jungle gym with Junior and his friends, and Junior found her really hot and liked her breasts.

In Smart Jeffy, Junior caught Rosalina's attention by calling her "Busty Tits" and Junior explaining to her what happened to Jeffy.

Rosalina is shown to be nice to Junior, he is shown to have a little crush on her (as Junior told Jeffy that his mother is very hot in Jeffy's Birthday!), but it's unknown if they still have a good relationship. In Jeffy and Junior sneak to Disney world. However, in recent videos. Bowser Junior is shown to dislike her. in Jeffy and Junior sneak to Disney World, he insults her by calling her old. In Among us, when Rosalina was the first one to report Jeffy. Junior is the first one to call her sus.

Rosalina has held a grudge against her since Jeffy's Parents!. She can't stand her beating up Jeffy. When Jeffy gets taken away, she got frustrated with Mario, yelling that she can't believe he let Nancy take him away, trying to convince him that Nancy beats Jeffy, but Mario shows absolutely no concern, even stating that it's good that she beats him, leading Rosalina to break up with Mario for his heartlessness.

Rosalina and Shrek dated in Shrek's Coma!, showing that Rosalina likes Shrek and considered him a nice guy. However, they broke up in the same episode.

Though the two have rarely interacted directly, it can be assumed she dislikes him considering Mario's dream at the beginning of Mario The Babysitter! and she was horrified when Bowser knocks Mario to the ground in The New House!. However, in Jeffy Goes To The Zoo!, Rosalina does not intervene when Bowser makes fun of Mario over Harambe's death, even laughing briefly when Bowser tells him that Junior would never do anything bad around gorillas. As seen in Bowser's Mistake!, she feels bad for Bowser's Ex-Wife for having to date him.

It was revealed in Doctor Jeffy! that he has a dislike to her. This could have been done as a joke as if she returns to the main cast he would be reverted to a supporting character in Mario/Jeffy videos. 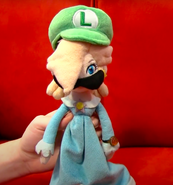 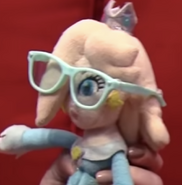 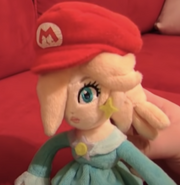 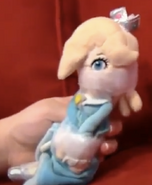 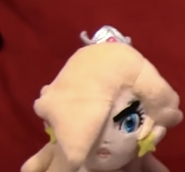 Doll
Add a photo to this gallery

Retrieved from "https://sml.fandom.com/wiki/Rosalina?oldid=490385"
Community content is available under CC-BY-SA unless otherwise noted.