Not to be confused with Patrick Star.

Patrick Coleman is a minor character of the SuperMarioLogan series. He has light brown hair, a blue shirt (with an orange lightning bolt on it) and dark blue pants. His catchphrase is usually "That is so cwazy!". Because of his severe ADHD, Patrick has been seen as a really hyperactive child. He is one of Bowser Junior’s classmates in school and has appeared in about 30 SML videos.

He is one of the craziest kids at school and is really crazy and hyperactive. He was diagnosed with Attention-Deficit/ Hyperactivity Disorder or ADHD and that is what makes him crazy. If he takes soft drinks, he will most likely be hyperactive or could possibly pass out. Since he is crazy, He doesn’t need a puppet string.

He also appeared as the main antagonist of Jeffy Breaks His Helmet!, and was one of the supporting antagonists in Jeffy's Yard Sale!

This version of Patrick is the Tommy 14 Glove Puppet from Silly Puppets Toys, which can be purchased here: http://shop.sillypuppets.com/Tommy-Boy-Hand-Puppet-p/sp3771.htm

Patrick Coleman was born on April 2 2009, to Zach (Super D) Coleman and Veronica Coleman and had a sister named Emily during his childhood his father was too busy working than spending time with his son and his mom was abusive and locked him in a cage and sometimes left him in parks so she would not have to deal with him. He first appeared in "Chef Pee Pee Quits! Part 3" as a runaway child and got ran over with a police car after attacking Officer Goodman later came back to life and attends First Grade with Bowser Junior and other kids. His sister is Emily Coleman and his best friend is Felipe . He also appeared in Jeffy's sister returns and he was the kid that got shot by the hitman.

Felipe was best friends and classmates with Patrick.

In "Jeffy's Sister Returns!", he was dressed up like Jeffy, it was stated that he helped Patrick cut off his hair for a stupid reason. He was then claimed to be friends with Jeffy. However, this episode was partialy a dream so it's unknown if these characters have a good relationship or not. In Jeffy's Halloween!, he gave money to Patrick so he could buy better candy. They were also shown to be friends in Jeffy's Lie!, but he got angry at him for lying and burnt down a hospital.

In "Jeffy's Imaginary Friend!", it shows that the two seem to be good friends with one another agreeing to be partners.

Mario and Patrick are shown to not have a good relationship. In "Jeffy's Sister Returns!", he throws Patrick out of his house after Patrick cuts off his arms and legs. In Jeffy's Halloween!, Mario steals Patrick's candy and money from him so that he can pay his house payment. In Jeffy's New Dad!, Patrick gets mad at Mario for peeing in front of him. 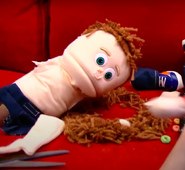 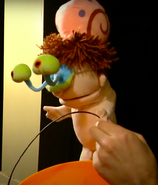 Gary the Snail
Add a photo to this gallery

Retrieved from "https://sml.fandom.com/wiki/Patrick?oldid=490625"
Community content is available under CC-BY-SA unless otherwise noted.