This is a list of characters who have had only one speaking appearance throughout the series. Despite only speaking in one episode, they may have made cameos in other episodes.

Luigi is a minor character in Bowser Juice Infomercial. He first appeared when he found out that his brother, Mario died and then Bowser told him shut up and started beating him up and killing him by burning him. This version of Luigi was thought to be the fake Luigi. 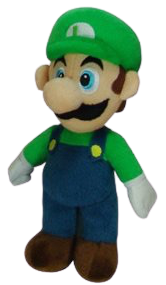 Dory is a minor character who appears in The Fishing Trip!. She appeared when it was revealed that Dory was the fish that Jeffy caught. Because of this, Mario puts Dory back in the water since she's looking for her family in California, which is referencing Finding Dory. 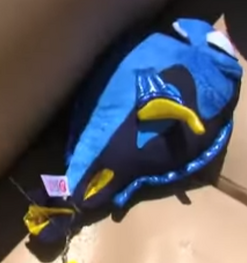 Patrick Star is SpongeBob's best friend and appears in Jeffy Gets Help!. He was seen when Jeffy was watching SpongeBob SquarePants, as he tells SpongeBob that he is sad because he can't get a girlfriend. Jeffy mistakes him for another character, Squidward Tentacles. However, in Alien Jeffy!, he is shown to know that they are two different characters, as he says both his name and Squidward's. A toy of him can also be seen in Jeffy Breaks His Leg! and Jeffy's Yard Sale! 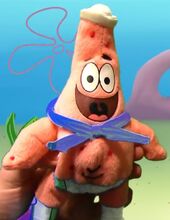 Timmy is a minor character in The Christmas Special!.

He was strangled by Chef Pee Pee because of the Golden Thomas.

His puppet is actually a custom puppet Logan received on his birthday in 2015, it was custom-made to look like him, and was made by the same company that made Jeffy. He is revealed to have to died by Brooklyn who says he choked on the golden Thomas. Despite being a one-time character, he made a cameo in Puppet Closet!.

Chef Bowser is the alternate version of Bowser in the original SML universe who appears in the first episode of Mario and Luigi's Stupid and Dumb Adventures (season 3). He is Alternate Chef Pee Pee's slave.

He is similar to Chef Pee Pee in the original SML universe. 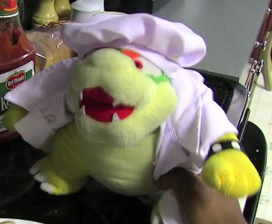 Alternate Chef Pee Pee (or simply Pee Pee) is the alternate version of Chef Pee Pee in the original SML universe who appears as the main antagonist in the first episode of Mario and Luigi's Stupid and Dumb Adventures (season 3). He is most likely the antagonist of the Alternate Dimension.

He is similar to Bowser in the original SML universe. 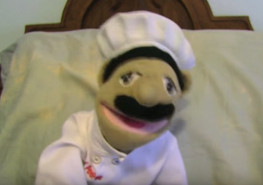 Harleyyy is the alternate version of Charleyyy in the original SML universe who appears in the first episode of Mario and Luigi's Stupid and Dumb Adventures (season 3). He is Alternate Chef Pee Pee's favourite TV show character. 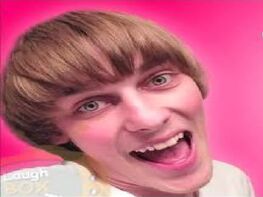 Alternate Toad is the alternate version of the original Toad in the original SML universe who appears in the first episode of Mario and Luigi's Stupid and Dumb Adventures (season 3).

Unlike the original Toad in the original SML universe, the alternate Toad is a country singer instead of a rapper. He also has a deep voice.

Unlike Black Yoshi, who is a criminal and likes to play Call of Duty, White Yoshi is calm instead of violent and she likes playing Animal Crossing on her Wii instead of Call of Duty since Call of Duty is too violent. 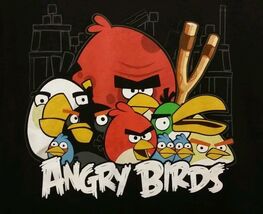 Alternate Shrek is the alternate version of the original Shrek in the original SML universe who appears in the first episode of Mario and Luigi's Stupid and Dumb Adventures (season 3).

Alternate Mama Luigi is the alternate version of the original Mama Luigi  in the original SML universe who appears in the first episode of Mario and Luigi's Stupid and Dumb Adventures (season 3). He is the star/mascot of Nintendo in the Alternate Dimension.

Unlike the original Mama Luigi who is retarded, the alternate version of Mama Luigi is smart. 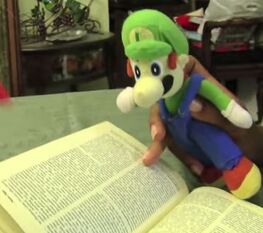 Dora the Explorer is a minor character in Mario and Luigi's stupid and dumb adventures episode 2 (season 3). She was seen when Mario traveles to different dimensions as she was trying to find the Map but she did not find him. Then, she falls asleep.

She sounds like Toad since their voices sound the same. 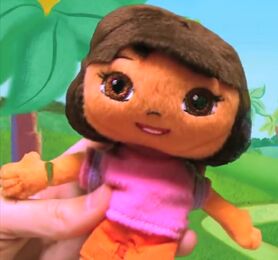 The Map is a minor character in Mario and Luigi's stupid and dumb adventures episode 2 (season 3). 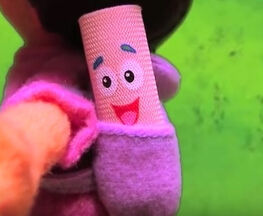 The Evil Cottonball is the antagonist of Bowser Junior's Biggest Fear!.

Timmy's Mom is a minor character in the 2015 Christmas video, The Christmas Special!. 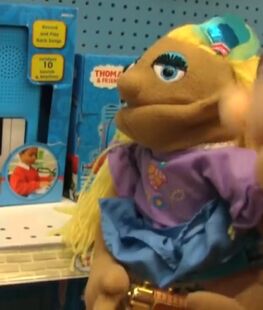 Booger is Brooklyn T. Guy's imaginary friend who appears in Jeffy's Imaginary Friend!. The only thing he does is tell Brooklyn Guy that he's "the man" for excessive emotional support, due to everybody else at school making fun of him for picking his nose. 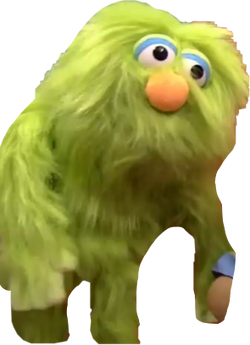 Mr. Plane Crash Guy was Brooklyn T. Guy's brother. It's mentioned that he died in 2001, which implies that he might have died in the September 11 attacks. It's also possible that he died on American Airlines Flight 587, a plane traveling from New York, that crashed with no survivors, which happened 2 months after 9/11, in which he was the pilot, which some people say that a poorly trained pilot caused the plane to crash.. He was only mentioned in Jeffy's Drone.

Chicago Guy was also Brooklyn T. Guy's brother. He was mentioned in The New House! and made his appearance in Jeffy's Coma! as a cop. Where he gets a call from an unknown person that someone stole the famous bean sculpture from downtown. He thinks it was Chef Pee Pee that stole it, so he drives all the way to his house and while on the way, he spills Hawaiian Punch on his shirt and doesn't want anyone to think that he got shot, it might make him mad. Sometime later, when Chef Pee Pee makes an excuse of thinking that the bean is his mirror, Chicago Guy thinks he is saying the right thing and he likes him. He then leaves the house.

She is a character who first appears in Heartbroken!. She was brought by Bowser Junior when he tried to help Cody find someone else to love, Little is known about her aside from the fact that she likes to eat ants & was kidnapped from the park by Junior.

Sharky is a character from Jeffy's Pet Shark!

Sharky is then killed by a bigger shark and later. He got digested After the end of the video.

Patrick's Step-Mom Is a character Who Appear In Black Yoshi's SuperPowers! When Vladimir steals the wallet and He Screaming for steal it the wallet from the purse snatcher She later appears in Jeffy's New Dad! after Patrick yells for her, saying Mario peed on him in a bush.

The crocodile appeared in Bowser Junior's Broccoli Problem!. He hates being called an alligator and loves eating food (possibly meat as well). He currently lives in Bowser's old apartment as a garbage disposal, I guess they forgot about him when they moved to their new house.

Wormy was Junior's pet until he traded Wormy to Jeffy for Pee Pee Suck. He then got Wormy back

The Mighty Eagle is a giant bird that can wipe out or basically skip levels in the Angry Birds franchise. In Black Yoshi and The Birds Episode 7, he killed off the pigs when Big Red threw sardines in front of King Pig.

At the end of The Lamp, he grants Junior's wish for everything to become normal again.

Tito Brown is a scammer who appeared in Bowser's Dilemma, as a guy who delivers fake pizzas to people to get their money. He gets a phone call from Bowser who wants to get a pizza, Tito goes to Bowser's house and gives him a fake pizza, takes Bowser's money, and runs back to his car, jumping through the car's window, and driving away. When Bowser opens the pizza box he finds a note left by Tito that says, "You suck! Learn to Cook!". He borrowed Koopa's car to deliver the fake pizzas

Tyler was the minion in Who Wants To Be A Millionaire? Episode 2 working backstage. He only appeared when Toad was introduced. 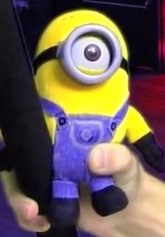 Tommy was a employee at Jimmy John's. He appeared in Jeffy Gets a Job!. He gets fired when he 'snitches' on Savannah for stealing money from the drawer, then he angrily stomps out of the of the restaurant. 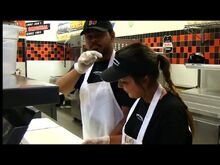 Mr. Chapman (Known as Archibald P Chapman) was First Mentioned in Bowser Junior's 9th Birthday Which Cody and Joseph Briefly Disguised as Himself when Bowser was Going to Meet Charleyyy at the Gas station.

Dave is a Disney World worker, who notifies Mario that Disney World is closing due to the coronavirus (called "cough-cough" in the video as YouTube discourages those that make videos related due to the topic). According to a close-up on his name tag, he is from Australia, but the part of the nametag that says which part of Australia he's from is unreadable. He appears in Jeffy Goes To Disney World!.

Retrieved from "https://sml.fandom.com/wiki/One-Time_Characters?oldid=373742"
Community content is available under CC-BY-SA unless otherwise noted.