What is the scariest movie you have watched?

"Netflix and Kill" is the 273rd episode of SML Movies.

Bowser Junior and his friends watch a haunted movie that kills you seven days after you watch it!

The episode starts with Junior , Joseph, and Cody sitting on the couch while Junior asks them if they want to watch Netflix. Cody told them about "Netflix and Kill which was this movie where a scary girl calls you and kills you seven days after you watch it." Joseph and Cody aren't too cool about it but Junior calls it boss. So they start it but then Junior gets a call on his phone from The Scary Girl only saying on the phone in a scary voice, "Seven days." Cody, Joseph, and Junior become scared.

While Junior, Cody, and Joseph think about it and they think seven days is plenty of time. So Junior asked when was the last time she pooped and when she was going to announce that she's gay and she said "Seven days" and then they started laughing. Then they realize she didn't block her number and told her how to block it. And then they realize they have seven days and that they got a while.

The video cuts to seven days later and the kids were scared. The TV comes back on and The Scary Girl comes out of the TV but she falls saying "Oh f**k". As she's coming towards them, Cody rewinds it so she goes back in and comes back out. The kids rewind the TV again but this time they pause it. Later that night, Chef Pee Pee sits down on the couch and presses play as The Scary Girl comes out of the TV and kills Chef Pee Pee. The Scary Girl then goes to Junior's room and kills Junior. She then goes to Cody's house and Cody saw her and said no girls allowed and the girl saw the dolls and she says "That's really gay." Cody told her to get back in her TV so she didn't kill Cody. As well as going to Joseph's house and she kills Joseph ending the video. Before Joseph dies, he exclaims “MOMMY, IS THAT YOU?!?!” 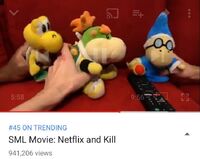 Retrieved from "https://sml.fandom.com/wiki/Netflix_and_Kill?oldid=498428"
Community content is available under CC-BY-SA unless otherwise noted.